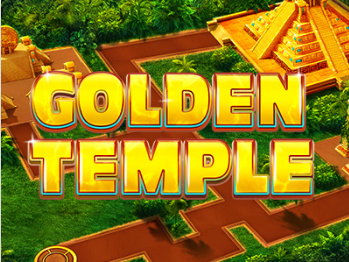 Temple of Gold is an ancient Egyptian themed slot from Red Tiger Gaming that has 5 reels and 20 paylines. There are 4 mini features including wild reels, nudges, swapped reels, respins and instant cash prizes. There’s also a Relic Hunt Bonus feature where you work your way along the cash trailer to win hidden ancient treasure.

Join Lora, an Indiana Jones (or perhaps Lara Croft) style adventurer on a quest for hidden ancient treasure in Temple of Gold. Created by Red Tiger Gaming and available to play on desktop, tablet, and mobile devices, it’s a 5 reel, 20 payline game that comes with 5 special mini features that awarded stacked wilds, instant win jackpots, re-spins, nudges, reel swaps as well as a cash trail bonus. Go for gold from between 20p and £400 per spin.

The interior of an ancient monument forms the backdrop to the reels in Temple of Gold – joining the Egyptian style A to 10 symbols are a trio of hieroglyphs. The golden shield is the wild, replacing all other symbols bar the scatter – it can land stacked and fill entire reels.

Listen out for the rumble of the reels as that heralds the arrival of 1 of the mini-features. Which one you’re awarded depends on the where the bonus wheel spin lands. Alternatively, an animated Lora can appear and trigger the bonus extras. The options are:

Visually, Temple of Gold is a typically slick effort from Red Tiger Gaming – the HD imagery is bright and bold and matched by a sweeping soundtrack that matches the adventurous theme.

There may not be any free spins on offer but we barely noticed as the mini features hit so often. They can deliver some very tidy payouts too. The Relic Hunt Bonus feature is far trickier to find which is perhaps appropriate given the hidden treasure theme!

There’s much to like in this tale of discovery. It looks excellent and there’s plenty of action. And with a few timely cracks of Lora’s whip, the Temple of Gold can live up to its name.